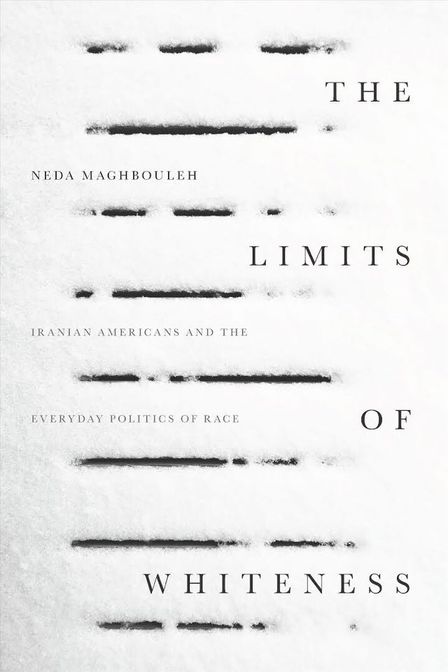 The Limits of Whiteness:
​Iranian Americans and the Everyday Politics of Race
2017 | Stanford University Press

Book Reviews
“Tremendously important for historians, sociologists, legal scholars and anthropologists, The Limits of Whiteness is required reading for those with interests in race, immigration, processes of othering, and diasporas.” —​Canadian Journal of Sociology

"Beyond the empirical contribution (arguably the most comprehensive second-generation Iranian American study to date), Maghbouleh's concerted effort to integrate the sociology of immigration with the sociology of race is notable and timely. She complicates assertions of assimilation and racialization in a way few scholars have done." - Contemporary Sociology (flagship review journal of the American Sociological Association)

"This book represents a major contribution to our broader understanding of the racialization of Middle Eastern immigrants in the United States [and] deftly weaves observations with theoretical insight. Maghbouleh's book is conceived well, conducted laboriously, based on appropriate sources, and written very well." - International Journal of Middle East Studies (flagship journal of the Middle East Studies Association)

"[A] groundbreaking study of Iranian Americans and race... Maghbouleh's work offers a powerful critique of post-racialism... this book should be required reading for anyone interested in understanding how processes of racialization can sometimes lead to a rejection of racial-nationalism in favor of a more capacious notion of identity open to pan-Asian and other 'south-south' affiliations" - Jadaliyya

"In clear and compelling prose, Maghbouleh has written a richly detailed chronicle of young people's shifting experiences of race and racism that takes their voices and actions seriously. Imminently readable with a robust sociological architecture... a conversation starter and insighful, timely analysis of what race means and feels like for brown youth at the limits of whiteness." - Mashriq & Mahjar: Journal of Middle East & North African Migration Studies

Advance Praise
“The Limits of Whiteness is cutting-edge scholarship at its best. Beautifully written and insightfully researched, it engages discussions of race and racialization of Iranian Americans with unprecedented depth and rigor. This is essential reading for those who care about the fraught and capacious legacies, and afterlives, of Middle Eastern and American racial projects.”
​—Sarah Gualtieri, University of Southern California; author of Between Arab and White: Race and Ethnicity in the Early Syrian Diaspora and Arab Routes: Pathways to Syrian California
​
“In this brilliantly designed, beautifully written, and persuasively argued book, Maghbouleh demonstrates that Iranian Americans inhabit a complex and contradictory relationship to race. They find themselves living at the limits of whiteness, considered to be not white enough for some purposes but too white for others. Her evidence, ideas, and arguments make significant and lasting contributions to our understanding of whiteness as a social construction. The vivid and poignant portraits of the lives of second-generation Iranian Americans that form the evidentiary base of this brilliant book reveal whiteness to be a fickle and volatile category, an ever shifting entity shaped by political, cultural, linguistic, and religious practices that initially might seem to have little to do with race.”​
​—George Lipsitz, UC Santa Barbara; author of The Possessive Investment in Whiteness and How Racism Takes Place
NM